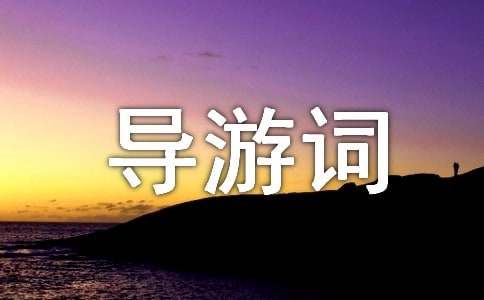 Welcome to the temple of Heaven. (After self-introduction) preserved cultural heritages of China. There are basically two kinds of visitors who come here: local pensioners who do exercises here in the morning and evening and sightseers both from home and abroad. All in all ,there are 12 million visitors very year. Now we are going to go along the route that leads to the alter. It will take roughly one hour. Mind you ,the emperor also walked along this route to pay tribute to the God of Heaven.

(Along the Southern Sacred Road leading to the Circular Mound Altar)

The largest group of architectures ever to be dedicated to Heaven ,the Temple of Heaven served as an exclusive altar for Chinese monarchs during the Ming and Qing dynasties. It was decreed that rulers of successive dynasties would place altars in their own capitals to worship Heaven and pray for good harvest. But why ?

The ancient Chinese believed that Heaven was the supreme ruler of the universe and the fate of mankind ,and thus worshiping rites dedicated to Heaven came into being.

The Heaven the ancient Chinese referred to was actually the Universe, or nature. In those days, there were specfic rites of worship. This was especially true during the Ming and Qing dynasties when elaborate ceremonies were held.

The Temple of Heaven was built in 1420 during the reign of Emperor Youngle of the Ming Dynasty. Situated in the southern part of the city ,this grand set of structures covers an area of 273 hectares. To better symbolize heaven and earth ,the northern part of the Temple is circular while the southern part is square .The whole compound is enclosed by two walls, a square wall outside a round one. The outer area is characterized by suburban scenery, while the inner part is used for sacrifices. The inner enclosure consists of the Hall of Prayer for Good Harvest and the Circular Mound Altar.

the Circular Mound Altar is enclosed by two walls ,each containing four groups of Souther

n Lattice Star Gate, each in turn consisting of three doors, with 24 marble doors altogether. Standing on the passage facing north, you will notice that with each pair of doors on is narrower than the other. This reflects the feudal hierarchy: the wider door was reserved for monarchs, while the narrower one was used by courtiers.

On the day of the ceremony ,the emperor would don his ritual costume and be ushered in by the official in charge of religious affairs. He ascended the three terraces in the forefront to pay tribute at the alter.

(Atop the Circular Mound Alter)

According to an cient Chinese philosophy, yin and yang were two opposing factors. Heaven and the odd numbers belonged to yang while the Earth and even numbers belonged to yin. Nine was the largest heavenly number accessible to man . What is more, the ancient people also believed that heaven consisted of nine layers and that the emperor` s abode was on the uppermost tier.

Contrary to appearances, this walkway is not a bridge at all . But how so ? This road is 4 meters above the ground and there is a cavern underneath that was reserved for sacrificial oxen and sheep. The cattle were slaughtered at a slaughterhouse about 500 meters away and brought here for sacrifice. All in all ,it can be said this walkway did serve as bridge and can be looked upon as the first cloverleaf in Beijing.

Looking back at the thoroughfare, you may realize that this walk is gaining height toward its northern end. As people approach the architectural group of the Hall of Prayer for good Harvest, the flanking groves of cypress recede and perspective widens. Here you are in Heaven.

the marble terrace up ahead is called jufutai, or CostumeChanging Terrace. It is located to the east of the Red Stairway Bridge and covers a space of 25 square meters .IT has marble Slab balustrades. The day before the service ,officials in charge would put up a yellow satin tent on the terrace for the emperor to change out of his yellow dragon robe into blue ceremonial clothes. After the service, the emperor would return to the tentand change back into his imperial robe before returning to the palace. (Proceed to the South Gate of the Hall of Prayer for Good Harvest)

(At the Gate of Prayer for Good Harvest)

the annex halls were symmetrically built on a 1.5-meter-hignbrick-and-marble terrace ,to set off the loftiness and magnificence of the main hall .This unique building ,38 meters in height, is characterized by a cone-shaped structure with triple eaves and a top that is crowned by a gilt ball. The roofing is made of blue glazed tiles, the color of the sky .Underneath the roof, the beams and bracket are decorated with colored paintings. The base of the structure is a triple-tiered, circular marble terrace. At a distance, the terrace looks like a gigantic, spiraling cloud with the structure perched on top of it .

Today the hall of prayer for good harvest is the hallmark of Beijing, which enjoys a prolonged history of civilization.

(At the base of the Hall of Prayer for Good Harvest)

The base of the hall is a triple-tiered, circular marble terrace, which is 90 meters in diameter and 6 meters in height ,covering a space of 4,000 square meters. Meticulous accuracy was given to the layout of the structure. In the middle of each three-tiered flight of stairs, there is a giant marble ramp carved in cloud, dragon and phoenix designs. To set off the ramps, the top of the balustrades and downpipes are designed with corresponding floral scrolls. In southern part of each tier, a gigantic bronze incense burner is placed. Sandalwood was burnt in them when rites were observed.

(In front of the hall of Prayer for good harvest)

Without the use of steel ,cement and nail, and even without the use of big beams and crossbeams, the entire structure is supported by 28 massive wooden pillars and number of bars, laths, joints and rafters. The four central pillars, called the dragon-Well Pillars, are 19.2 meters high and painted with designs of composite followers, representing the four season. There are two rings of 12 scarlet pillars each. The inner ring represents the 12 months and the outer rings the 12 divisions of the day and night .Between the two rings there are 24 partitioned spaces to mark the solar terms of the Chinese lunar year. The pillars, 28 in number, also represent the 28 constellations in the universe- the ancient Chinese believed that there were 28 constellations that made up the sky.

The center of the stone-paved floor is a round marble slab, which is 88.5 centimeters in diameter. Interestingly, the slab features natural black and white veins, corresponding to the dragon-phoenix design on the ceiling. This particular slab is known as the Dragon-phoenix stone and is regarded as a treasure inseparable from the hall.

The furnishings within the hall are placed in their original positions dating back to when Emperor Xianfeng ruled .In the forefront and above the throne are enshrined tablets in commemoration of Heaven. On either table on each side tablets of the emperor` s ancestors were placed. Each tablet is fronted by an altar. A total of 24 kinds of offering were made on it ,including soup, wine, assorted cereals, and a calf.

The sacrificial rites were observed in the wee hours of the morning, sometime in the first month of the Chinese lunar year. Because it was still dark, candles, lanterns and torches were lit. This lighting coupled with the incense being burnt inside the hall ,helped make the ceremony both grand and mystical.

By the time the service began,207 musicians and dancers would be performing on platforms outside the hall. The emperor, in his blue sacrificial robe and with an air of piety and sincerity, would walk slowly into the hall, kowtow, and offer wine and prayer in hornor of the deities and his ancestors. All of the offerings would then be taken to incinerators on the eastern side of the gate of prayer for Good Harvest. With this we conclude our visit to the Temper of Heaven. The feudal monarchs and their sacrificial rites have long vanished in history .However, this group of magnificent and lofty structures remain as a fine testament of the ancient Chinese` s ingenuity and as one of the cultural heritages of mankind.

(On the Long Corridor)

From the Eastern Gate of the hall of prayer for good harvest, we have now enter a 300-meter-long corridor. Consisting of 72 sections, this corridor served as a connecting building between the Slaughterhouse. Heaven Kitchen, and the main hall ,It is said that this once served as a sacrificial food production line. Flanking the corridor are shopping stalls. You may find some souvenirs for your family and friend there.

Well ,that is all for this tour. Thank you for your attention. I look forward to your next visit. Good luck and bon voyage.